For my day job, I help design CNC machines. Sometimes that looks like running around wearing a lot of different hats, and I don’t get to do much actual design, or actual engineering. That’s where Vacation Engineering comes in. Flying machines make for great vacation engineering projects. They have a nice beginning, and a clear and concise end. Usually that end is punctuated by a good solid impact with the ground.

Recently, I’ve been working on refining my folding tri-copter design. People have built folding tri-copters before, most notably FPVManuals, which is where I first heard of the concept. It’s an excellent design, and he sells kits. For my own designs, I started out building them from ABS, instead of acetal. It’s a lot lighter, has better impact resistance, and unfortunately suffers from one major, major drawback. When you cut it with a laser it releases hydrogen cyanide 🙁

Still, with extreme ventilation it’s possible, and so the first machine I built was made out of white ABS. It flew really well, until it eventually met its untimely demise atop the Eureka sand dunes in Death Valley. 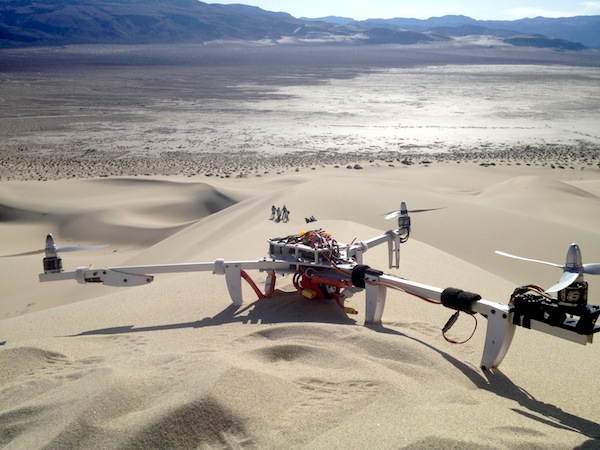 Rev2 used a Quadrino controller, and suffered from a major design flaw. There was just too much mass in the center of the craft, relative to the arm length and motor sizes. The control loops just weren’t tunable. I could get the craft to stabilize, but once it started moving it would rapidly lose stability and fall out of the sky like a rock. I had switched to acetal (aka Delrin) at this point, so the extra frame mass was mostly coming from the plastic plates. 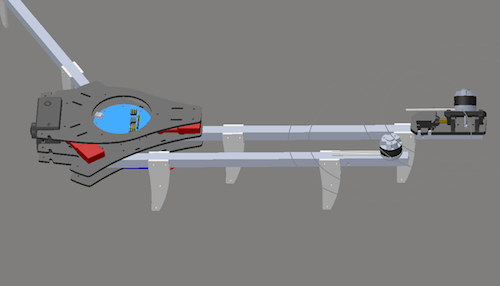 After learning that lesson, I took Rev3 in a completely different direction. I had spent hours and hours trying to tune the Quadrino’s PID loops from the previous version. A process which involved connecting a cable, setting the new values, disconnecting, and retrying with the new settings. It was obnoxious. Around this time HK released the excellent KK2 flight controller board, which had a revolutionary new feature: onboard setup and tuning via buttons and an LCD screen.

So I ordered one and set about designing Rev3 for the KK2 board. It came out really well. Mass was considerably lower and centrally located, and so the loop tuning only took a couple of test flights to get up and running. I was still using 0.5” aluminum C-channel arms at this point, and they don’t offer a lot of stiffness. Eventually, after a few hard landings they would get bent and introduce pretty agressive Yaw drift from geometry errors. The restraining tabs from the folding mechanism where also too lightweight and eventually I bent and cracked this frame. 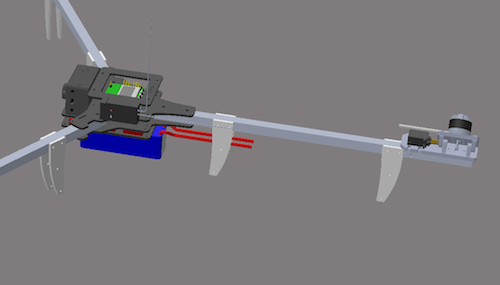 For the fourth revision I kept most of the design changes I made for R3, however, I swapped out the expensive aluminum arms for cheap pine wood ones. These proved to be considerably more resilient than the aluminum arms. The wood arms are much easier to make than metal arms. They only require two holes to be drilled with a drill press, after being cut to length. It took a long time before I broke an arm, and it broke in exactly the right manner, leaving the rest of the frame and electronics intact.

The ESC/Battery carrier plate has also proved to make the rest of the wiring neater. This keeps the ESC wires out of pinch points, a problem I had with earlier revs where the ESCs hung out the side. 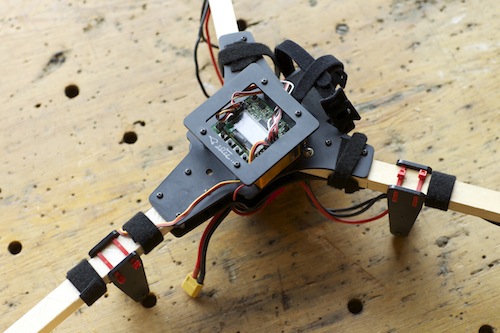 Next up in the vacation engineering adventures will be a two axis stabilization gimbal for the GoPro up front. I’d also like to revise the tilt-tail design. It’s pretty heavy and reduces agility from the extra mass.

Then I plan on finding a beach to fly it on, for an actual vacation.