It’s been five months since the whirlwind adventure that was the Edinburgh Fringe Fest. I’ve decided to take a break from robots and head back to NYC to hang out with The Paper Dolls. This time in Brooklyn. They’re working on a new doubles act for aerial silk slated to debut at the House Of Yes for The Sky Box‘s monthly cabaret show. 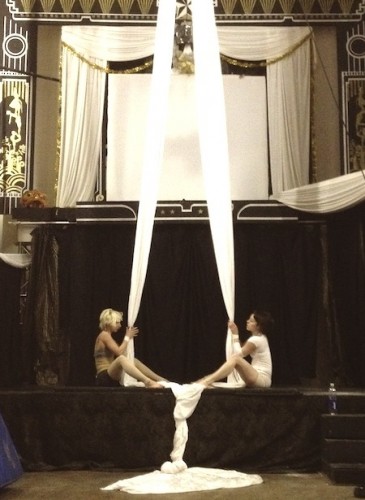 It looks like the website is a little out of date, but doors are at 8:00pm. If you find yourself near Williamsburg this Thursday the 19th, I highly encourage you to wax your mustache, hop on your fixie, and ride on over to 342 Maujer St for some high skills aerials.

I’m pretty excited for it. They’ve spent the last couple of years working on the arduous task of combing aerial dance, with classical theatre. This often necessitates reducing the skill level of the performance quite a bit. Usually to fit the story, but more often to reduce performance risk exposure. That’s a technical term that means roughly means, “you can’t do your hard tricks twice a night for 30 days in a row.” Most big top aerial performances you will see fall under this umbrella. In Edinburgh, I suggested they dust off something more traditional, and so they’ve put together a very complicated doubles routine that takes full advantage of the SkyBox’s towering rigging truss. This is a space purpose built for those out on the cutting edge of the aerial arts. There are no fancy costumes. No complicated theatre hardware. Just 10 meters and 9 points to hang from.

New York is a brutal place to survive as a performing artist, but out on the edges, hidden amongst the warehouses, you can find some amazing things if you look up.