I’ve been trying to make little paper robots. Or rather, I’ve been trying to create a library of mechanical linkages that I could later make robots with. Paper is cheap, easy to work with, and I can try out a bunch of different ideas quickly without breaking my piggy-bank. In some forms, such as cardboard, paper is extremely strong for its weight. This makes it an ideal platform for building robots, and leads to The First Problem with robotics: any sufficiently agile robot will weigh less than its power supply.

Of course, people have built robots out of paper before. Some of them have even managed to get up and walk around a bit. What I’m interested in though, is reinventing the wheel. Or leg, as it where. I’m interested in seeing what sort of mechanical linkages one can fold up from a single sheet of paper. No purpose really, other than that I like the patterns left behind, like little shadows on the page.

The best way to experiment with these paper mechanisms, is to place a sheet of card stock on a cutting matt, pick up an x-acto knife, and start folding up parts. This is where I started. 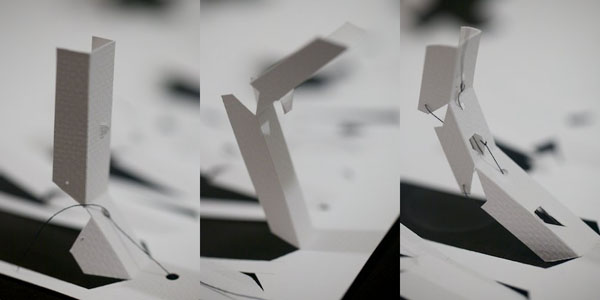 The first linkage I tried didn’t work very well. It was difficult to control because the string only had leverage for the first joint. After that, there wasn’t a good way to provide an antagonistic return force. The second joint used the side walls to create an arm lever, but I got it backwards, and the control linkage went the wrong direction. The third design worked beautifully. The side walls make up the extension arm levers, and the front face folds out to make an attachment point for contraction.

Not bad for 20 minutes of doodling and a shot of vodka.

What about multiple axis? Is there a way to make a double joint? The obvious solution is to make two separate bends at 90 degrees. This isn’t very strong, structurally speaking. Rectangular sections in paper are inherently unstable, and lateral forces would cause the tube to collapse. Triangular tubes, on the other hand, are very strong and stable. By combining three hinges offset at 120°, I can get a full 360 rotation. A paper universal joint! 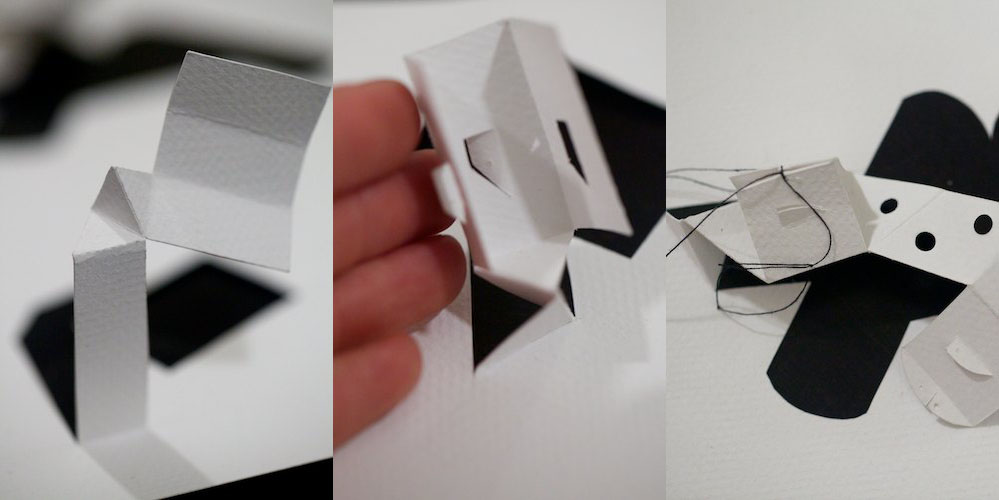 I started out with a simple double bend, but got the number of triangles wrong, the second one faired much better. For the third, I tried to see if the pattern could be repeated indefinitely along an axis. It could, and in this manner, I can make an articulating linkage of indefinite length. I made a CAD model, cut it out on the laser, and assembled a three-link arm. 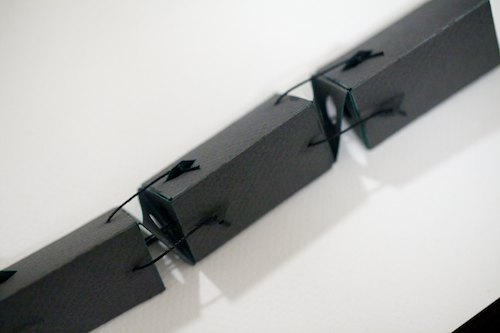 Quickly, one notices that there is going to be a rather large number of control lines in short order. This lead to The Second Problem with robotics: any sufficiently agile robot will have more actuators than you have the patience to solder. This is why, outside of universities, you will rarely see a robot with more than 18 actuators. The human body has well over 200, by comparison. The larger the number, the more likely they will use an open-loop position based control system. The reason for this is what I call The Third Problem with robotics: any sufficiently agile robot will have a sensor system twice as complicated as its motor system. This leads to an interesting observation about how robots are built.

I am often struck by how backwards the field of robotics can seem at times. If your goal is to achieve the agility of biological systems, there are some excellent models out there to learn from. One is probably doing the backstroke in your soup right now. Their’s a fair amount of variation in how the major components are arranged, but without exception they all have the following characteristics:

Everything else is details. Invariably, and I’m not immune to this, when someone starts building a robot they usually start with the actuators and skeletal linkage. Why not start with the sensors? There’s a lot more territory to cover there, and a lot more room for improvement. The answer probably has something to do with engineers. We really like making flashy demos, and a clunky pile of servos is inherently more interesting than an inert pile of sensors. Also, sensors are hard. Can’t we just go back to actuators and linkages?

After making the little paper universal joints, I got stuck in an existential loop. Why make robots at all? What’s the point? It’ll just wiggle around a table at best. With so many hard problems to solve ahead of me, why not just give up now and make puppets? Puppets are cool, and really interesting in their own right. There’s plenty of room for experimentation, 100% less ARM/AVR assembly, and no messy wire harnesses to solder.

Sometimes one just has to slog through the existential crisis of purpose in the hopes that the journey will be its own reward. I decided to try and remake a classic: the hexapod. Only, I would make it out of paper. I’m sure it’s been done before, but anything worth doing once, is probably worth doing with style. For extra silliness, we’ll try and make the entire thing fold up from as few parts as possible.

After a few hours, I came up with the first part. A two axis swing arm linkage. It folds up from a single sheet of paper, and will scale up to 6 legs. Next up is the main body, but first, it’s time for me to use my own sensor network and go find lunch. 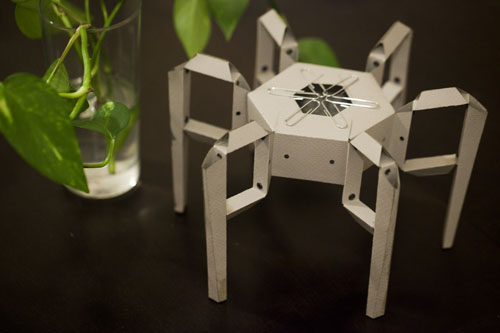 "But will it ever know love?"

Everything is easier when I’ve had lunch. Here’s the completed hexapod skeleton. I still need to figure out how to jam 12 little servos, a battery pack, RF link, and a sandwich in there. In the meantime it’ll just hang out on the desk looking confused.