Recently, I acquired a laser cutter.

It’s a giant beast of a thing, originally designed for fabric cutting. It was built by the Han Yue Ming Laser Company in Dongguan, China and features an enormous 1400x900mm cutting envelope and a 150W tube. We do a lot of design work around here that gets cut out on lasers, so finally having one in house was pretty exciting!

We wheeled it into the shop, hooked it up, and got down to business. Very quickly though, excitement faded into frustration. Business became working around the myriad array of bugs, quirks, and down right dangerous near misses. When you acquire an imported hand me down laser cutter, what you are really acquiring is a relationship. Not unlike the one a doctor and patient might share.

I don’t remember what the final straw was. It might have been the “Top Wisdom” control software with its incomprehensible interface. Maybe it was the occasional controller crash that would cause it to ignore all the safety interlocks and start cutting at full speed with the doors open. Or the terrible motion planning that would leave the corners uncut when running higher than 2% speed. I’m not sure which, but ultimately we decided that maybe the best thing for us to do for the patient was brain surgery. 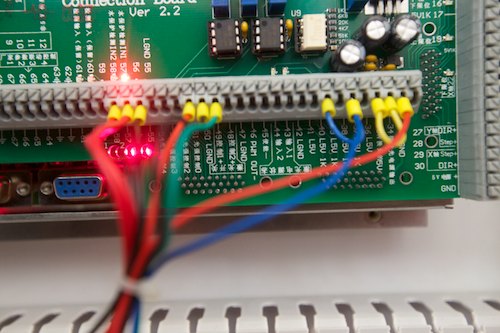 There comes a time in every makers life when they ask themselves, WWTID?1 I really liked what the lasersaur folks where up to. Open source lasers, I like open source! What could go wrong? Against the better judgment of my peers, the first route I went down was to explore the idea of replacing the internal guts of the PN-1490 with an Arduino. This involved doing a lot of sleuthing and debugging to determine which of the various cables and pins in the Chinese laser went to what parts of the control system. It was surprisingly well documented inside, but unfortunately not in a language I can currently read.

After taking lots of pictures to navigate my way back should I get lost, I unhooked the servo drives from the main controller and attached them to the Arduino. Loaded with the latest lasersaur build it only took a few minutes to get the X/Y table up and running. That’s as far as we got though, as we quickly learned that some of the software control systems are not read for prime time.

After doing a fair amount of research, I found a local importer called LightObject, run by a fellow named Marco who had a very lively and supportive tech forum built up around his product catalog. There is this expression I really love, If you want to know your future, look to your friends. The same goes for companies I do business with. If want to know how a company will treat you, look to their support forums. There was lively discussion on the board about laser conversions, DIY systems, and other esoteric errata so I decided to take the plunge. 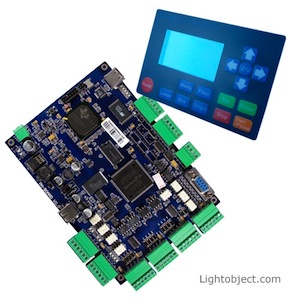 Fetch me a new brain, Igor.

He carries a line of laser controller systems that share the nearly universal form factor found in Chinese imports. They’re reasonably priced, and after reading up on the options I ultimately settled on the AWC-608. It arrived a few days later and we immediately set about hooking it up.

There where a few problems, for one, the cabinet voltages where all dialed in for mainland Chinese power. 220V/60Hz. Since most of the internal power supplies where of the switched variety, I figured some of them might be able to run their buck converters from lower voltages. Usually there’s an input voltage range on the case that lets one know if one can get away with this. As luck would have it, most of the power supplies maintained stable output voltage at their designed ranges when supplied good ol’ fashioned American electrons. Only the controller power supply needed to be replaced. While the AWC-608 claims to require 24V, it runs reasonably well at 12V and I was able to hook up a tiny 12V switched supply with the same form factor as the original.

The laser power supply that came with the cabinet was another matter all together. After spending a few days trying to reverse engineer its control protocol (which looked a lot like line noise to my oscilloscope) I eventually determined that it was absolute garbage and ordered a new 150W supply from the fine folks at LightObject. Looking at the almost identical interior of these two objects side by side it became clear what the problem was. The new supply was made with electronics, while the old supply was actually made from poop. It’s important to remember that when designing a laser power supply, the only corners you should be cutting are with the laser beam. I’m honestly surprised it hadn’t caught fire. 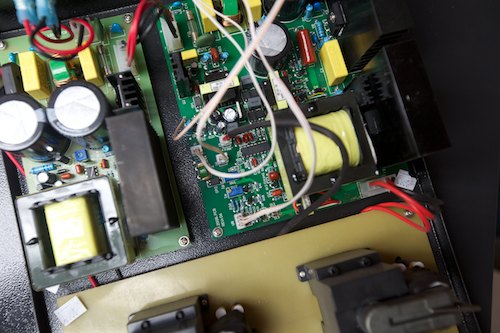 Poop. Not a good conductor.

The internals of laser control systems are not really well documented. It took me a while to figure out how the PWM signal interfaces with the POT on the front panel. It took even longer to figure out that the “Water Protect” signal is an active low enable control signal for the power supply that hooks up inline with the flow switch from the chiller, and that I need to flip my magnetic limit switches. The internal lights needed replacing. The list went on and on.

I had now spent over a thousand dollars and a weeks worth of time replacing the guts of this machine. It was a new beast, ready to face a whole new world of possibilities. LightObject’s AWC-608 controller is a nice piece of hardware, that continues to be actively improved upon by its developer. The windows based control software works and is pretty stable. If you find yourself in possession of a misbehaving imported chinese laser system, I highly recommend checking them out.

1 “What Would The Internet Do?”