Recently, my friend and long time collaborator, Audrey Penven, presented me with an interesting problem. She was preparing for a photo shoot with vocalist/composer Jill Tracy, and wanted to project slides of fabric as a part of the light source. Normally, this would have been a simple case of “put slide in projector, plug projector into wall”, but the photo shoot had one unfortunate drawback: no power. 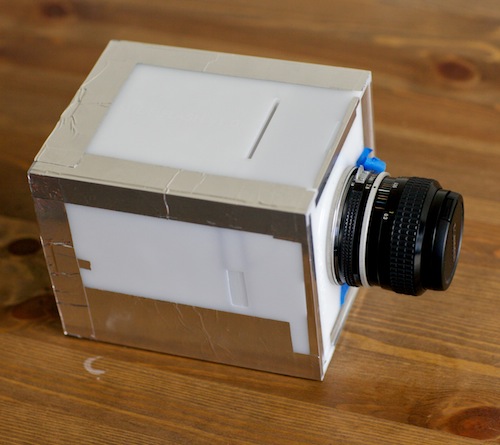 The strobes where powered by a Paul C. Buff Vagabond Mini, which while extremely capable, still does not have enough juice to drive a ’70s era slide projector for very long. We discussed a few options, and then decided that the absolute best course of action would be to design a slide projector attachment for the Einstein strobe head. In 6 hours.

Other than being portable, the other design consideration was an adjustable throw distance. Slide projectors don’t really come with interchangeable lenses, but I had suggested that using a +DSLR lenses would get her a large number of projection options from now, and into the future. We had a broken Canon 20D lying around the office, which provided a lens mount. Now we just needed an enclosure. Well, when all you have is a sheet of acrylic and some parametric cad, every problem starts to look like a trip to TechShop. 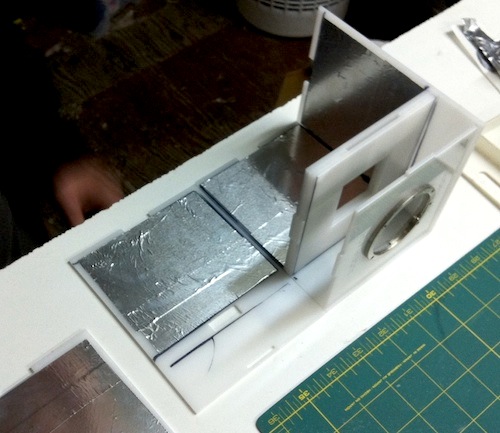 An hour later we determined the critical dimensions, and threw together a quick cad model of the enclosure as cut from sheets of 0.1” acrylic. We had some time to kill while waiting for the laser reservation, so I took a bike ride. Cutting out the pieces took about 15 minutes. Back at the office we screwed on the lens mount, and taped up the panels into their final shape. We used aluminum tape as a light sealer. Under ideal circumstances one would just start with opaque black acrylic, but you work with what you have.

We tested it out, and it fit perfectly on the flash head. With the modeling light cranked to full power it was easy enough to focus the image on the far wall. We tried out a few different lenses, and it all worked as expected. Suddenly though, the projector stopped focusing. We turned everything off and checked the mechanism. The projector case was very, very hot. Peering inside, we feared the worst. The modeling lamp had started to soften the acrylic, and had completely melted the delicate slide. By focusing very quickly, Audrey was able to save the shoot, but the next version will be built out of metal. Maybe some IR reflective glass to protect the slide to boot.

If you’d like to make your own, easily meltable Slide!Flash, the flat pattern is presented here:

(This is a CorelDraw file, as that’s the environment one uses for laser cutting at TechShop)