We finally got that rain we’d been promised all week. This is the first time in nearly a decade I can remember there being a Spring in San Francisco. Rain showers, punctuated by the occasional rainbow have been a novelty here for a while. So it is somewhat amusing that I’ve spent the last week designing an umbrella completely impractical for such weather.

Or rather, rebuilding one. A couple weeks ago I was in Atlanta working on The Paper Doll Militia’s upcoming show This Twisted Tale. We had collected ourselves in a little warehouse district, somewhere across the tracks and adjacent to a herd of goats, to iron out some of the technical details for the show. One particular scene has an umbrella that the dolls hang from. The original, while beautifully decorated, was unfortunately made of glue, wood, and economies of scale. Quite expectedly, it broke during rehearsal, and I vowed to rebuild it.

Better, faster, and stronger as they say. When all you have is access to a million dollars in machine tools and free time, every problem starts to look like a week long adventure in fabrication. Ever since TechShop opened in San Francisco, I’ve found myself there working on various and sundry side projects. There might be a purpose to it all some day, but at the moment it’s just leveling up. Our hero rolls the dice: welding +2. He rolls again: machining +4, CNC +7. This is how I found myself making a bespoke, artisinal umbrella.

The slippery slope started with an umbrella handle. Maybe one made from steel pipe instead of wood? TechShop has this old fashioned manual bending form that I’ve spent a little time trying to figure out. The manual was written probably around the same time the machine was originally designed, in the 1800’s by my estimate. Like most fabrication tools, they’re really the most rewarding after you’ve spent a few frustrating days making scrap metal with them.

The handle on this umbrella is made out of Sch80 1/2” steel pipe. Using a 4-inch curve form, I call up my old homeboy Archimedes and bend it into a perfect little teardrop. Only then did I notice my mistake: now it was bent solidly around the die form. Sigh. Fortunately, after a little head scratching I was able to hack saw off one end and wiggle it free. Voilá! 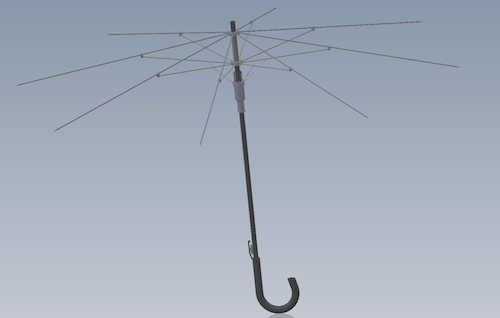 The only umbrella you'll need for the zombie apocalypse.

To figure this all out I used one of the great unsung heros of the 21st century: parametric CAD. Chances are pretty good that just about everything around you more complicated than a paper clip was at some point a computer model. For my purposes, I just needed an umbrella. The neat thing about this model is that it’s fully articulating, so I can drag the slider up and down to close and open the umbrella. Perfect for visualizing clearances, or for designing unconventional canopy patterns. More on that later…

After rebuilding the handle I then moved on to repair the retainer wire in the top-notch, which had broken in Atlanta, and needed replacing. At first, this seemed like an easy enough task, but I could not have been more wrong.

Something that may not be immediately obvious about this umbrella, is that it is spring loaded and has a really nice automatic opening action. To accomplish this, a rather large compression spring sits between the slider and the appropriately named spring-carriage. This spring has 8 high tension wires that are used to pull the spreader bars flat, which in turn opens the umbrella. The problem is, if the top notch is broken, the spring spends all its energy trying pull the umbrella apart while one is trying to put it back together. Sad trombone.

Another thing about the retainer wire: it’s subject to high shock loads when the umbrella opens. The first one I tried to replace it with was copper picture wire. It opened once. This was after two long, frustrating hours trying to wrestle the spring and eight ribs into position. The second one was multi-strand steel picture wire. It opened twice before blowing apart. Finally, I found some 19ga stainless solid wire, which has so far managed to hold up. After that awful experience I realized that everything on this umbrella was probably going to break into a million pieces if I didn’t replace it with something stronger. Probably mid show, in the most embarrassing manner possible. (Not sure what that would be, but trust me, it would be terrible.) So, back over at TechShop I started machining replacement top-notch, slider, and spring carriage parts out of 6061 aluminum.

I kept the horrible wire mechanism of the original design. Mostly because it’s really the easiest way to make 24 individual hinges around a column, but also because I believe that with heavier gauge wire it won’t be as big a problem. Time will tell. I have a backup plan should this fail. A backup plan involving hardened steel captive pins.