I’m sitting at a cafe in the Dogpatch across from this beautiful, hand built bamboo bicycle. It’s interesting, people have been trying to improve the bicycle for over a century, usually to make it lighter. 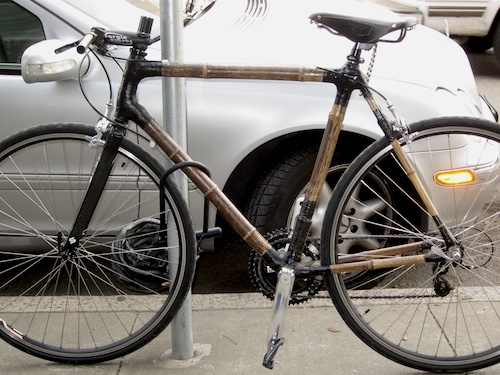 Since it’s basically impossible to improve on the double triangle frame shape, most improvements in the last 200+ years of bicycle design have been about advances in material sciences. Exotic alloys, composite materials, etc, etc. Every step of the way, cutting weight.

This reminded me of this thing someone once said:

because really, who want’s a 50lb bike?

I love this quote. I can’t remember where I heard it first, but it got me thinking. What is the utility of a 50Lb bike? Would anyone ever ride it? What if we took the idea of building the fastest and lightest bike, and flipped it on its head. What if we designed for more weight instead of less? How heavy would a bike need to be to not require a lock?

How would this change our social interaction with the humble bicycle?

There’s a couple ways to run this experiment. The first thing that comes to mind is to build a very heavy bicycle and attaching a GPS tracker to it. One could place it in a busy part of town and monitor its progress, tracking how far it moved in a certain amount of time. Then after each run, we could add say, another 10Lbs to the bike and see how far it travelled on the next run.

Before we drop any more science though, how would one make an adjustable weight heavy bike? My first thought is to make it out of schedule 80 pipe. This would make for one serious boat anchor. It could perhaps, have a plug in the frame somewhere which would allow us to add sand or lead shot to increase the weight.

It might be nice to use standard bike tubing sizes, such that the frame had the appearance of a regular bike, but weighed 10 times as much when picked up.

Tradition dictates that the bike be painted orange, like public bikes in the Netherlands. Some allowances for vandalism might need to be taken into account, but ultimately a 50Lb bike is going to be kind of hard to wreck. I think Valencia St. in San Francisco seems like an appropriate place to try this experiment. Maybe it would be a fixed-gear.

One thing is for sure, while a 50Lb fixi might not need a lock, it certainly needs brakes.