Take a look at this truck. Not much to look at is it? It has a 10′ flat bed, a compressor that runs off the main engine, and a compact crane called a knuckle boom that folds up behind the cab. “What’s it good for?” you ask. 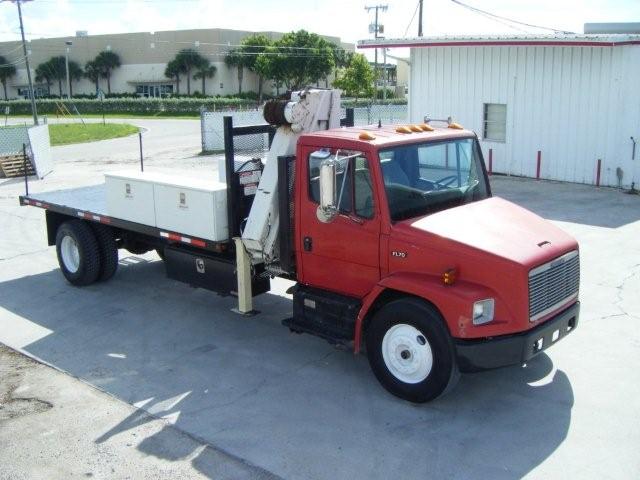 Why, a portable aerial circus of course!

A few days ago my roommate and I were discussing variable reach forklifts, and their utility as a performance platform. VR forklifts are neat. With a 25′ reach and 6000LB working load capacity, they’re highly capable rigging platforms. The only problem with a VR is that they’re really not highway capable, making one somewhat difficult to transport. They also hold exactly one person, plus beverage, in the cab.

My roommate suggested that perhaps an alternate kind of construction utility vehicle would be better. You’ve seen them a thousand times on the side of the road, usually repairing a utility pole, or trimming trees. A few nights ago while watching the “Imaginarium of Doctor Parnassus”, I wondered what a modern version of the traveling gypsy stage would look like. My roommate suggested that a flatbed knuckle-boom would make an excellent portable circus. Or rather, a portable stage with a 14,000Lb movable aerial rigging point, which leans heavily towards aerial dance.

With a phalanx of work boxes under the deck you could haul all your costuming, rigging, and lighting. Crash pads and other stage equipment fit easily on the deck, and as you have a crane on board, loading and unloading heavy containers is effortless. A few LED powered globe strings and you’ve got your ambient lighting. A single motorized light above the rigging point provides a stage spot. In about an hour you could set up your stage & lighting, throw up some screens for a green room, and start bothering the unsuspecting public with your art.

“What about a hydraulic folding stage?” I ask. We consider a pair of extension wings folding down from the deck, tripling the performance area. Programable lighting traces the outline of the knuckle boom. Sound sits atop the cab. More and more questions arise, and more and more answers.

Strangely enough, the one thing we have no shortage of is potential collaborators.

A few days later, as I sit at my local coffee shop writing this post, I think about the eternal question: Is it worth doing?  Even between just the two of us, we have all the technical resources to make the physical aspects of this project not just possible, but an actuality. Outfitting a utility truck as a portable circus is easy. The hard parts are all about people.

I’ve never started a dance company. I don’t know anything about it. I’ve been in a few performances, done some basic choreography, and watched many friends do their thing. This is all well and good, but a circus is all about people. Conveying emotion through movement. Telling a story. These things are much harder for me than shock-load calculations, hydraulic folding stages, DMX controlled lights, and wire boom crane controllers.

Still, the idea is incredibly compelling. So what do you say, anyone else interested?