Last week I did some modeling and assisted in a photo shoot for my friend Audrey Penven. My friend Ian got the idea at a recent party, to grab my IR camera and shoot pictures of people in front of Microsofts new Kinect video game controller. 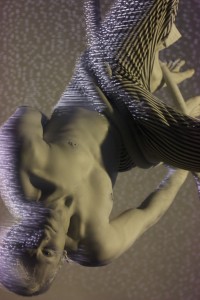 The controller uses a computer graphics technique called “Structured Light” to build a depth map of the field of view. This allows the Xbox Kinect camera to discern shapes and ultimately build a skeletal model of the person standing in front of it. It does this by projecting a grid of tiny infrared dots across the room, and reading the position of those dots with another camera. Those infrared dots show up really well on an IR camera as they’re quite bright. Projected against a person, they create interesting contours and patterns.

We figured out a few things that make the whole process work smoothly. The most notable was probably a foot switch to momentarily turn on a focusing light. At 700nm, my converted Rebel XT won’t focus. We also discovered that a regular flash, dialed down to 1/128th, can make a nice IR fill light to compliment the Kinect.

There were a few surprises, for one, the dot pattern shows up better when it’s not too close to the subject. We also found that the dot pattern turns to mush if the Kinect moves in the slightest, but produces very interesting results if the subject is moving.

Something I’m curious about, is given a picture taken from the frame of reference of the Kinect, what kinds of scene reconstruction could be done later? Would it be interesting to roll this technology into consumer cameras? I can imagine, with a bit of refinement, some sort of camera that can do advanced region of interest (ROI) and follow focus in real time.

This probably wouldn’t be hard to hack together. Maybe a project for another day…