Yesterday I read an article in the LA Weekly about a new Shepard Fairey “HOPE” poster. The poster features the grinning face of “V”, a comic book character in an Alan Moore graphic novel who uses highly theatrical violence to inspire people to revolt against their tyrannical government. “V” wears a stylized grinning Guy Fawkes mask which has a become a popular icon of political uprisings.

I had been thinking about the concept of remixing his original Obama campaign poster. I think the original inspiration was a group of UC students who pitched a tent inside a Bank Of America branch, and another group who launched tents in the air with balloons after being barred from camping. After reading the LA Weekly article, I had to make my own.

On his blog, Shepard writes about how he feels that “I still see Obama as the closest thing to ‘a man on the inside’ that we have presently.” I disagree. This is a President who has taken the Bush doctrine, and just run with it. Instead of turning around our erosion of civil liberties, he’s accelerated them. 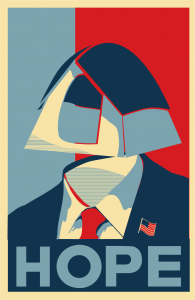 I wanted a symbol that wasn’t tied to violence. Guy Fawkes was a Catholic terrorist, who killed himself before he could be hanged, drawn and quartered after attempting to blow up parliament in 1606. Other occupy imagery has tried to use a raised fist to rally support. I think it really sends a mixed message about non-violence when your imagery is a fist and a dead terrorist.

A tent, on the other hand, is inherently non-violent. It’s a shelter, and best represents the core of what got us into this mess in the first place: housing. To me, the tent represents all the people who lost their homes. All the people who lost their jobs. It represents a protest movement of people committed to being heard by their voices, and not their fists. My hope is that someday when we’ve moved on from parks and bank lobbies to congressional seats & mayoral offices, that an idea will take a new place in American history as a symbol of hope, instead of a politician.

An idea that someday, no one will be living in a tent, because they will have a home of their own to occupy.

Here is the pdf of the image, suitable for printing. The remixed source image is from Jeff Rankin and has a Creative Commons Attribution-Share Alike 3.0 Unported license. Thanks Jeff!! 🙂